The essential skill in the modern era of Python programming is the function. The reason many people don’t learn to program is they believe that mastery of other parts of Python is necessary. In the cloud and machine learning era, the function rules.

The Colab notebooks for this chapter can be found here.

What can you do with a function? #

With just a few lines of code, many diverse and complex problems have solutions. 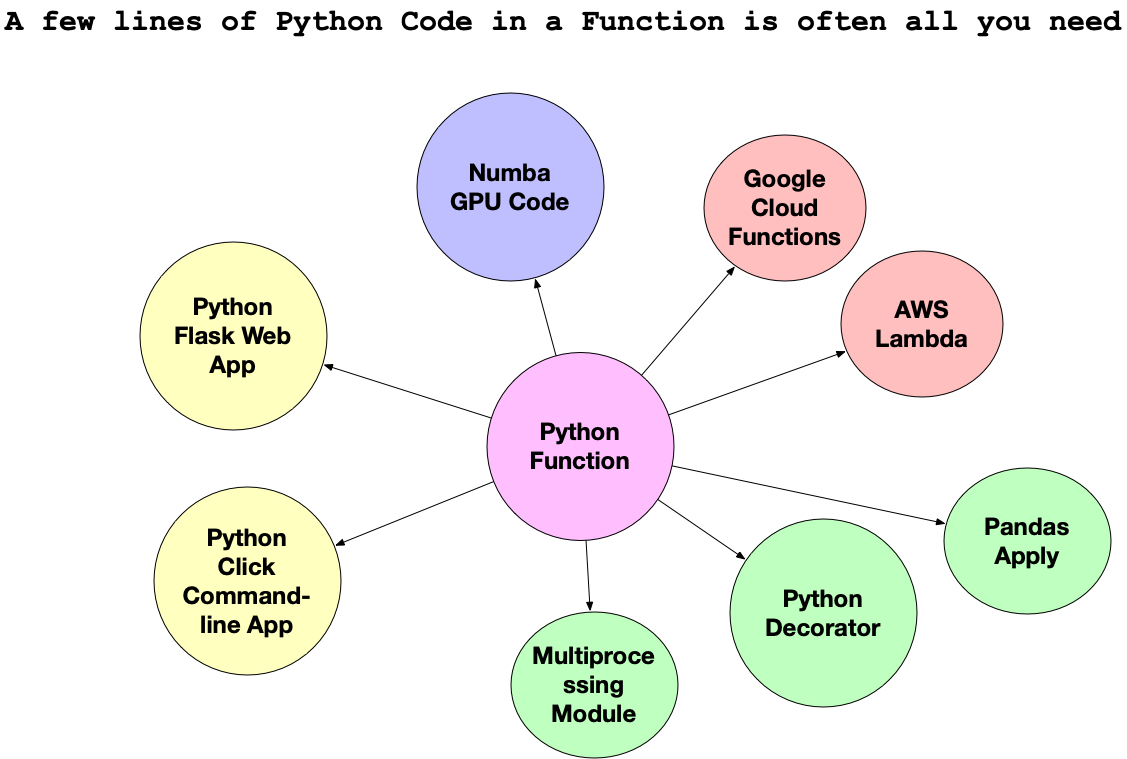 Let’s take a look at a straightforward function that returns “Marco” if you pass in “Polo”.

This function takes in the name argument. If the name matches Marco, then it will return Polo. You can see this in action below. The function is called with the string "Marco" passed in.

Notice that if another name, in this case, Bob is passed it that it doesn’t return anything. The reason for this behavior is because, by default, a Python function will return None.

As simple as this function is, it works in many different environments and targets. It can be “applied” to a Pandas DataFrame. It can run in the Cloud via AWS Lambda. Perhaps it could become a web service?

If you understand how a function works, you can program just about anything with the Python language! This concept is the secret that has kept many beginners from programming. It only takes a few lines of code to do incredible things. Not only that, but it is an excellent design to write small pieces of logic, even when building a more complex system.

Challenge: Write a simple function that takes a variable and returns something else if a phrase matches. For example something like this:

Did it work? If not, let’s talk through some critical components of what makes a function work. It must have a few things to make it useful. A Python function uses the word def followed by some variable, in this case, somename. This syntax is what the name of the function is. It also has brackets () where the input goes and then is followed by :. Inside it needs to do something.

In the example above, it checked to see if the variable name was equal to Marco. Finally, it returns someresult which is a variable you create. A function doesn’t have to accept input, and it doesn’t need to return something explicitly, but most useful functions allow input and return some value.

Function With No Input or Return #

If called it prints.

One way to check this is to assign the output of the function to a variable. You can then print that variable. In the following example, the variable return_value stores the output from the function, which is None, the default value of a function that has nothing to return.

Function That Returns Without Accepting Input #

There are many cases where some logic performs in a function, but it doesn’t need to accept input. Here is an example where the two strings, Marco and Polo add together, then return.

Challenge: Write a function with no input or return

Function That That Accepts Input Without Return #

Let’s do another scenario. This example is a function that accepts input but only prints.

If Marco passes in, it will print Polo.

If another name passes in, it will run the other print statement.

Notice that even though it prints, the function itself still returns None.

Challenge: Write a function with input and no return