This chapter contains a collection of recipes that have come up through the years in building command-line tools.

Getting started with Docker #

There are two primary components of Docker: Docker Desktop and Docker Hub.

The desktop application contains the container runtime, which allows containers to execute. The Docker App itself orchestrates the local development workflow, including the ability to use Kubernetes, which is an open-source system for managing containerized applications that came out of Google.

So what is Docker Hub, and what problem does it solve? Just as the git source code ecosystem has local developer tools like vim, emacs, Visual Studio Code or XCode that work with it, Docker Desktop works with Docker containers and allows for local use and development.

When collaborating with git outside of the local environment, developers often use platforms like Github or Gitlab to communicate with other parties and share code. Docker Hub works similarly. Docker Hub allows developers to share docker containers that can serve as a base image for building new solutions.

These base images can be built by experts and certified to be high quality: i.e., the official Python developers have a base image. This step allows a developer to leverage the expertise of the real expert on a particular software component and improve their container’s overall quality. This process is a similar concept to using a library developed by another developer versus writing it yourself.

Why Docker Containers vs. Virtual Machines? #

What is the difference between a container and a virtual machine? Here is a breakdown:

What problem does Docker format containers solve? In a nutshell, the operating system runtime can package along with the code, which explains a particularly complicated problem with a long history. There is a famous meme that goes, “It works on my machine!”. While this is often told as a joke to illustrate the complexity of deploying software, it is also true. Containers solve this exact problem. If the code works in a box, then the container configuration can be checked in as code. Another way to describe this concept is that the actual Infrastructure runs as “code.” This process is called IaC (Infrastructure as Code).

Here are a few specific examples:

A developer can work on a web application that uses flask (a popular Python web framework). The Docker container file handles the installation and configuration of the underlying operating system. Another team member can check out the code and use docker run to run the project. This process eliminates the multi-day problem of configuring a laptop correctly to run a software project.

Data Scientist shares Jupyter Notebook with a Researcher at another University #

A data scientist working with jupyter style notebooks wants to share a complex data science project with multiple dependencies on C, Fortran, R, and Python code. They package up the runtime as a Docker container and eliminate the back and forth over several weeks that occurs when sharing a project like this.

A Machine learning engineer needs to take a new model and deploy it to production. Previously, they were concerned about how to accurately test the new model’s accuracy before committing to it. The model recommends products to pay customers and, if it is inaccurate, costs the company a lot of money. By using containers, it is possible to deploy the model to a fraction of the customers, only 10%, and if there are problems, it can be quickly reverted. If the model performs well, it can soon replace the existing models.

One of the advantages of the Docker workflow for developers is the ability to use certified containers from the “official” development teams. In this diagram, a developer uses the official Python base image developed by the core Python developers. This step is accomplished by the FROM statement, which loads in a previously created container image. 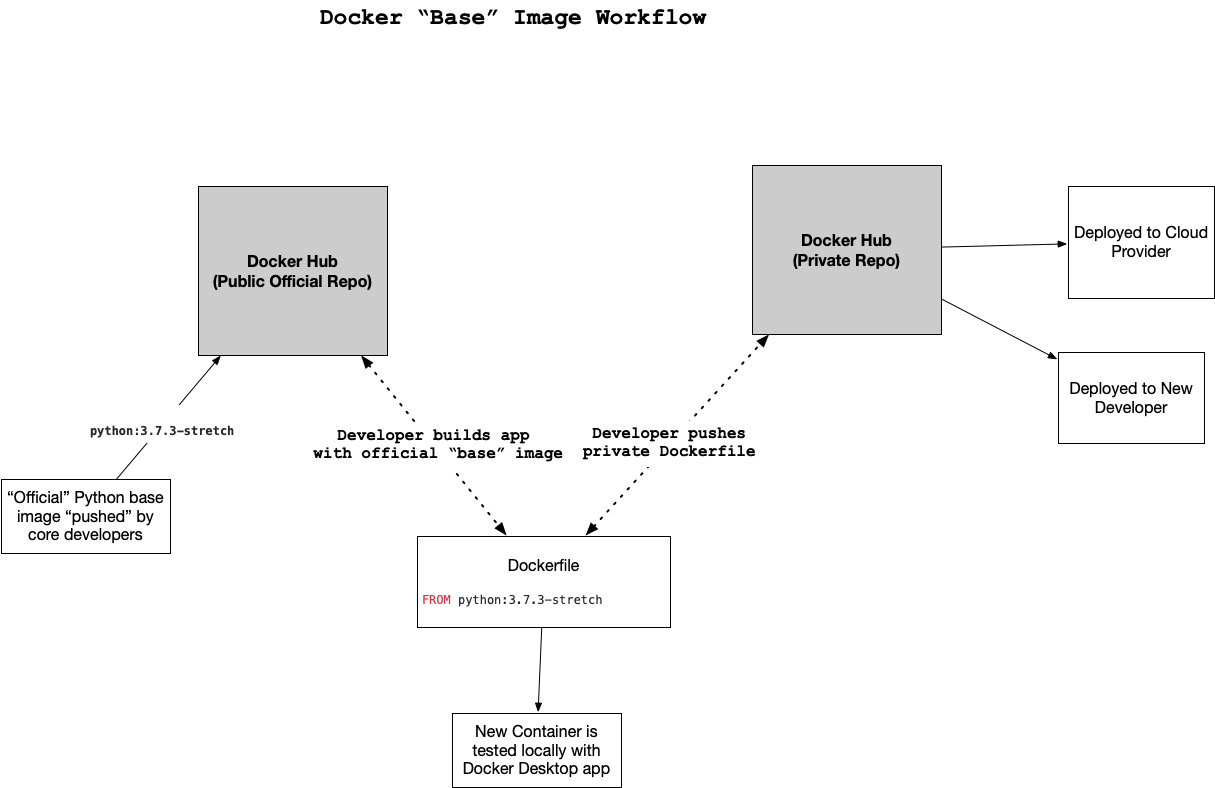 As the developer changes to the Dockerfile, they test locally and then push the changes to a private Docker Hub repo. After this, the changes can be used by a deployment process to a Cloud or by another developer.

There are a few common issues that crop up when starting a container or building one for the first time. Let’s walk through each problem and then present a solution for them.

You can configure logging for a Docker container by selecting the type of log driver, in this example, json-file and whether it is blocking or non-blocking. This example shows a configuration that uses json-file and mode=non-blocking for an ubuntu container. The non-blocking mode ensures that the application won’t fail in a non-deterministic manner. Make sure to read the Docker logging guide on different logging options.

The Docker container has an internal set of ports that must be exposed to the host and mapped. One of the easiest ways to see what ports present to the host is by running the docker port <container name> command. Here is an example of what that looks like against a foo named container.

What about actually mapping the ports? You can do that using the -p flag, as shown. You can read more about Docker run flags here.

You can configure docker run to accept flags for setting Memory, CPU, and GPU. You can read more about it here in the official documentation. Here is a brief example of setting the CPU.

This step tells this container to use at max only 25% of the CPU every second. 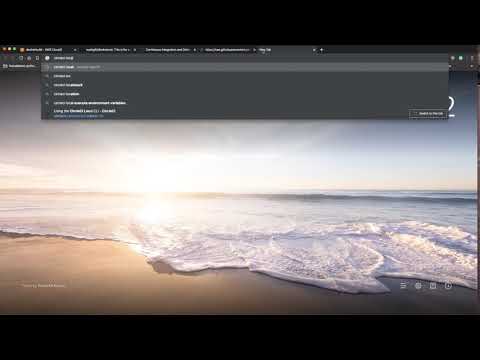 Any person can pull now: 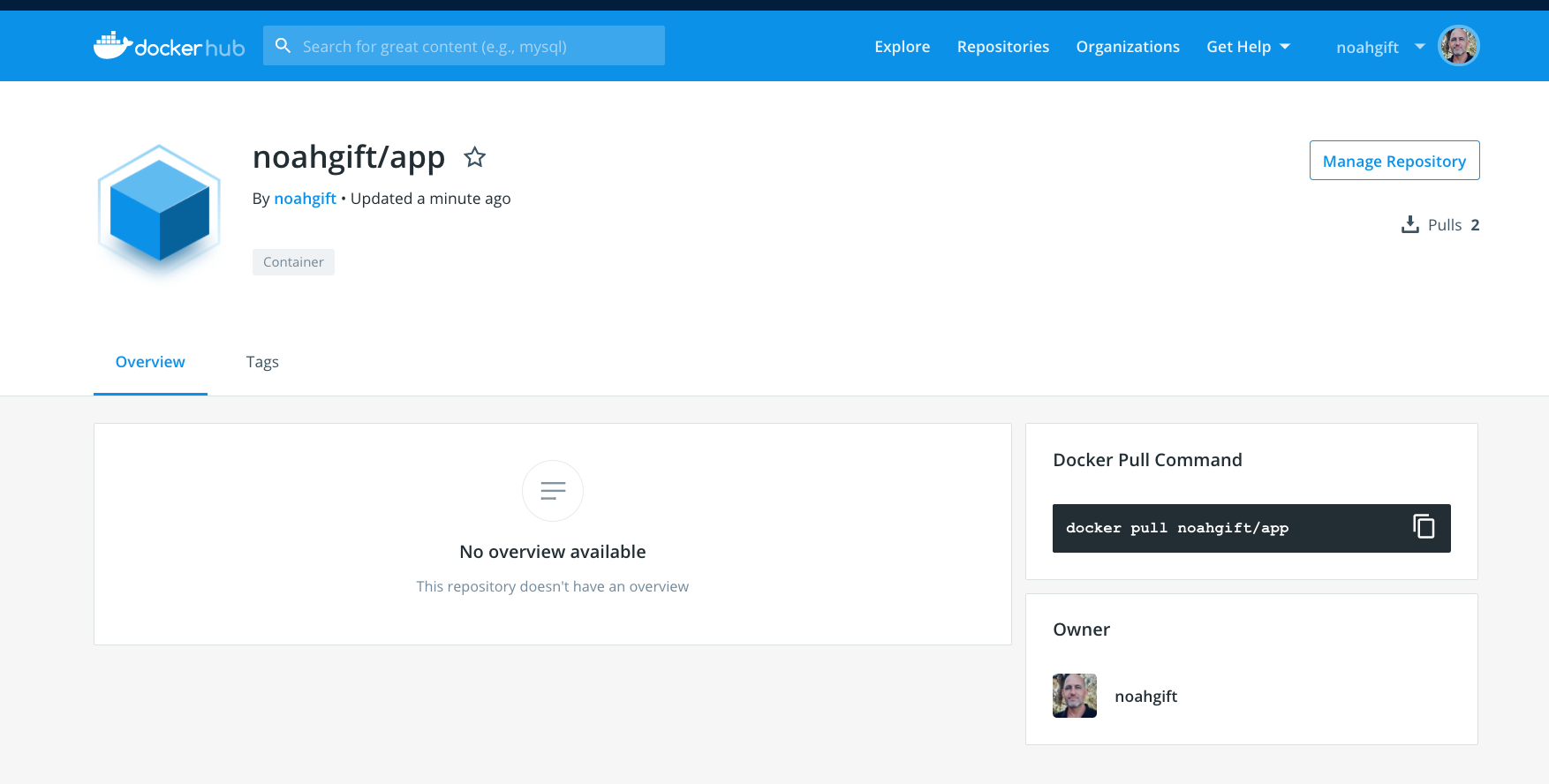 Converting a Command-line tool to a Web Service #

One item to point out is the feasibility of building command-line tools that get converted to web applications. You can see older idea I toyed with here: Adapt Project

Newer frameworks like chalice may be a secure fit for dual cli + web projects.

Documenting your Project with Sphinx #

Sphinx is a tool allowing developers to write documentation in plain text for natural output generation in formats meeting varying needs. This step becomes helpful when using a Version Control System to track changes. Plain-text documentation is also useful for collaborators across different systems. Plain text is one of the most portable formats currently available.

Although Sphinx is written in Python and initially created for the Python language documentation, it is not necessarily language-centric and, in some cases, not even programmer-specific. There are many uses for Sphinx, such as writing entire books and even websites.

Think of Sphinx as a documentation framework abstracting the tedious parts. It offers automatic functionality to solve common problems like title indexing and code highlighting (if showing code examples) with proper syntax highlighting.

Sphinx uses reStructuredText markup syntax (with some additions) to provide document control. You probably already know quite a bit about the language required to be proficient in Sphinx if you have ever written plain-text files.

The markup allows the definition and structure of text for proper output.

As you can see, that syntax looks very readable in plain text. When the time comes to create a specific format (like HTML), the title converts to a significant heading, bigger fonts than the subtitle (as it should), and the lists automatically get numbered. Already you have something quite powerful. Adding more items or changing the order in the numbered list doesn’t affect the numbering, and titles can change importance by replacing the underline used.

As always, throughout this book, create a virtual environment, activate it, and install the dependencies. Sphinx, in this case:

The framework uses a directory structure to have some separation between the source (the plain-text files) and the build (which refers to the output generated). For example, if making a PDF from a documentation source, the data would be placed in the build directory. This behavior can be changed, but for consistency, I use the default format.

To get started, use the sphinx-quickstart tool (which should be available after installing Sphinx) to start a new documentation project. The process prompts you with a few questions. Accept all the default values by pressing Enter.

I chose “My Project” as the project name that gets referenced in several places. Feel free to choose a different name.

After running the sphinx-quickstart command, there should be files in the working directory resembling these:

These are some of the important files that you interact with:

Be cautious of jumping right into writing documentation. A lack of knowledge about layout and outputs can be confusing and could significantly slow your entire process.

Take a look inside “index.rst. " There is a significant amount of information and some additional complex syntax. Right after the main title in the index.rst file, there is a content listing with a toctree declaration. The toctree is the central element to gather all documents into the documentation. If other files are present, but not listed under this directive, those files would not get generated with the documentation at build time. We are now ready to generate output.

Run the make command and specify HTML as output. This output can be used directly as a website as it has everything generated, including JavaScript and CSS files.

With our first pass at generating HTML from the two files, we have a fully functional (static) website.

Inside the _buildi directory, you should now have two new directories: doctrees and HTML. We are interested in the HTML directory holding all the files needed for the documentation site.

With so little information, Sphinx was able to create a lot. We have a basic layout with some information about the project’s documentation, a search section, a table of contents, copyright notices with name and date, and pagination. The search part is interesting because Sphinx has indexed all the files, and with some JavaScript magic, it has created a static site that is searchable. When you are ready to make more modifications, run the make html command again to regenerate the files.

If the look and feel of the generated output are not to your liking, Sphinx includes many themes that can be applied to change how the HTML files render the documentation ultimately. Some critical open source projects, such as SqlAlchemy and Ceph, heavily modify the HTML looks by changing the CSS and extending the templates.

Sphinx changed the way I thought about writing documentation. I was excited to easily document almost all of my open-source projects and a few internal ones.